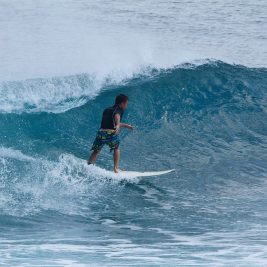 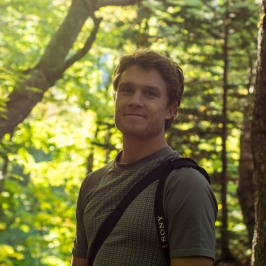 Laurie Hedges (MSc) is a wildlife biologist, surfer, videographer and part of the group Cinematic Science.

As a videographer, Laurie produces films particularly in furthering the causes of conservation projects. He collaborates directly with conservation practitioners, researchers, NGO’s, organisations and universities working in the field to tell stories that can lead to positive change. His films are most often used for lobbying stakeholders, educating and empowering local communities and drawing attention to under reported issues. He also trains new film makers and videographers in conservation hotspots across the globe to enable them to tell stories from their own perspectives both nationally and internationally.

Most well known for his research with melanistic leopards in Malaysia, he has researched and worked to protect large mammals in South-East Asia and Central America.

As a surfer, Laurie is devoted to chasing big waves, whilst spearfishing and exploring new cultures.

Some mountains just look IMPOSING. These ones, Pico Bonito, may hold more secrets than anywhere else in Central America. It’s possible there are species here that have gone extinct from everywhere else. Few people have ever penetrated far into the sheer rock faces, canyons and peaks. . Still in Moskitia waiting on things to get back to normal! This was taken en-route here weeks ago. #mountains #landscape #honduras #picobonito #centralamerica #lockdown #travel #wilderness #sony #laceiba #dramatic #mountain #mountains
So it looks like I’m not going anywhere anytime soon! Curfew has been extended across Honduras and doesn’t look like it is going to change anytime soon. Borders are still closed so I could be Moskitias newest resident... the sunsets however are rather beautiful and there’s now plenty of time for self portraits 🌅
So turns out I’m rather stranded in the Moskitia forest. Honduras has closed down travel internally, borders are shut and with no roads it seems like I’ll be here a while! Plenty of fresh food and water though and the views are rather amazing so all in all, could be a lot worse. Stay safe everyone!!
Sunrise rituals at sea in Myanmar 🇲🇲 On my way to Honduras tonight! 🇭🇳 I will be filming in La Mosquitia, one of the great wild landscapes of Central America, working on a project to document indigenous peoples efforts to protect their land against invading cattle ranchers.
I don’t normally do this but here goes... This is the island of La Ngan in the remote outer reaches of the Myiek Archipelago, and is home to one of the last remaining communities of sea gypsies in Myanmar, known as Moken. Not so long ago they lived almost entirely at sea, only returning to land when the rains started. Filming there was both beautiful and tragic, as the Moken people told of how their ancestral fishing and cultural grounds, which have been a part of their way of life for centuries, are now being closed off to them by the Japanese pearl company @tasaki_intl. The Moken openly talk of being wiped out, as their whole community will have no way to live, if planned expansions of their pearl farms, already disrupting the Moken way of life, go ahead. So @tasaki_intl, and all your corporate partners, I’d invite you to go spend some time with these people, listen to them, learn from them and consider the weight of your short term profits and bank statements, measured against an ancient way of life and people who are being crushed by them.
Short stint in the Alps 🇫🇷 before a manic few months begins! First up - Brazil 🇧🇷 on Sunday to film efforts to reforest sections of the Atlantic forest, preserve endemic wildlife and promote community livelihoods. Next - Myanmar (Burma) 🇲🇲 for films to tackle the issue of the shark and manta ray fin trade. Then Honduras 🇭🇳 to begin a series documenting indigenous peoples fight to protect their land from illegal cattle ranchers with a stop over in Costa Rica 🇨🇷 for some wildlife encounters.
@leonardodicaprio strikes again!!! 🤯 Another one of my short film’s the utter legend has shared! At the recent @cop25_madrid - indigenous leaders, Central American goverents, NGO’s including @thewcs and @global_wildlife_conservation and civil society groups committed to forming an alliance to combat climate change by protecting the #5greatforests of Mesoamerica. Tackling the existential threat of global warming will require us recognising the stewardship indigenous people across the globe have over their land, and models like this represent a beacon of hope.
So good to be grounded and home even for a bit. 2020 is already looking like another mad one! Projects in the pipeline include throwing a spotlight on the trade in sharks and manta rays in Myanmar 🇲🇲 exploring the Atlantic forest of Brazil 🇧🇷 telling the story of indigenous rangers protecting their forests in Honduras 🇭🇳 as well as many others yet to be confirmed... gotta say though there’s nothing quite like north Devon autumn surf and skies.
APPEAL FOR HELP. Some of you may remember I spent a month earlier this year working with a community in Manila, training youths to shoot and produce film whilst also helping out kids like these get a meal every day. They really need our help right now. A fire broke out last week which has left 29 families homeless and 36 children have lost all of their school supplies and uniforms, without which they are not able to go to school. . It costs £25 per child to replace uniforms and supplies and £200 to replace the families roofs. . Every bit of support is critical right now and if anyone is able to donate anything you will have mine, the community and the @purplecommunityfund ‘s utter heartfelt thanks. Head to https://www.p-c-f.org/get-involved/donate/ to send over whatever you can and please share if you are able. Let’s get these kids back to school and a roof over their heads 💜
!!NEWS FLASH!! 🤯 @leonardodicaprio has picked up the Five Forests film that I made!!!!!!!!! The incredible legend of a gentleman has reposted the short clip of it I posted on Instagram and this has now being picked up by news organisations across Central America from Honduras to Nicaragua. The aim is that this will raise the profile of the #fiveforests and a movement, spearheaded by @thewcs and @global_wildlife_conservation can gain momentum to conserve these five irreplaceable wildernesses as key to preserving the identity of mesoamerica and essential in the fight against climate change.